Case has manufactured a two and a three-blade 79 pattern.

Case manufactured some three blade 79 pattern knives prior to 1940. Most have a spear or clip master blade along with a pen and file blade. 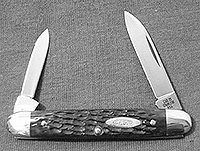 The two blade version is a 3 1/8″ pen knife that is most often referred to as a senator pen or equal end pen. They usually have a spear master blade (sometimes a clip master) along with a pen blade that opens on opposite sides. Some do not have left side bolsters, and a few have bails on the left side. Case introduced these knives were sometime prior to 1915.
Shop For Pen Knives 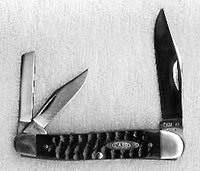 This pattern is a split back serpentine whittler that measures 3 7/8″ closed. It is often called a large or big whittler. They have three blades. The master blade is a clip, and the other two include a short clip and coping blade that open on the opposite side of the master. These knives were introduced prior to 1940 and were later discontinued in the late 70’s.
Shop For Whittler Knives

This pattern number was first used on a 2 3/4 ” slim jack knife that is known as a doctor’s or physician’s knife. Most have a spear and pen blade and a flat rear bolster. Case started making this version sometime prior to 1915.

In 2005, Case reassigned the number to what is known as a Baby Doc, which looks to be patterned after their full-sized 85 pattern Doctor’s Knife. These smaller variations have a spear and spatula blades and measure 2 3/4″ closed.

This pattern is 3 1/2″ medium sized whittler that is often called a balloon whittler, or swell center whittler. It has been manufactured with both a saber ground master clip blade and a flat ground master clip blade. The second and third blades are usually short clip blades, but some have been manufactured with coping secondary blades and rarely file bladesl. These knives were introduced by case sometime prior to 1915 and were later discontinued in the early 80’s. They have since been reintroduced in 1999. The newer version has a slightly wider frame.
Shop For Whittler Knives

Case manufactured at least two distinct knife patterns that had the pattern number 85.

Case’s oldest and lesser known 85 pattern is a 3 5/8″ sleeveboard style whittler. This version normally has a spear master blade and two pen blades that extend from the rear. They were being manufactured by W.R. Case and Sons prior to 1915. 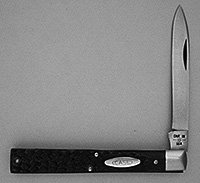 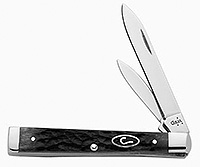 Case’s most recent and most well known 85 pattern is a jack style knife known as a doctor’s or physician’s knife that measures 3 5/8″ closed. Over the years, some have been manufactured with one blade, and some with two. The master blade is usually a spear blade, and when there is a second, it is usually a pen or spatula blade. These knives were introduced prior to 1940 with a two blade version and a single blade version. Case stopped making the two blade version prior to 1965, and the pattern was discontinued all together in the mid 70’s. There were some special issues made in 1980 and in the early 90’s, and the pattern was reintroduced full scale in 2001. These knives have an interesting history. They were very important tools for doctors when physicians used to make door to door house calls. The elongated spear blade was used to aid as a back up scalpel and to divide pills. The flat butt caps were design to grind the pills into powder. Some versions incorporated a spatula that was used as an aid in mixing salves.
Shop For Doctor’s Knives

This pattern has been manufactured as both a two and three-blade knife. 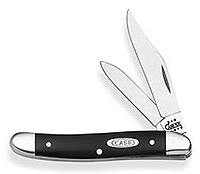 The two blade knife is categorized as a serpentine style jack knife that measures 3 1/4″ closed and is most often referred to as a small premium jack. The master blade on these knives is usually a clip blade, and the other is a pen.Case started making them sometime prior to 1940.
Shop For Jack Knives 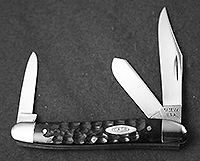 The three blade versions one of several knives known as a stockman. This particular knife measures 3 1/4″ and is one of the smaller examples. For this reason, it is often referred to as a small or medium stockman. These knives usually have a clip master blade along with a spey and pen blade. They were introduced by case sometime prior to 1940.
Shop For Stockman Knives 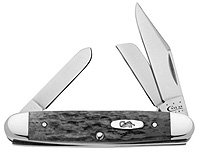 The three blade version of the 090 pattern is known as a medium cigar stockman knife. It measures 3 3/8″ closed & usually has a clip master blade along with a sheepsfoot & spey secondary.
Shop For Stockman Knives

This pattern is a multi-blade knife that measures 3 3/8″ closed. It is known as a JR. Scout knife. Case introduced it as a smaller version of the existing 0045 pattern scout/camper’s knives but built on the smaller 090 frame. They all have a spear blade, can opener, screwdriver and leather punch & bail. You will find this knife furnished in many different handle slab variations ranging from synthetic G10 to genuine mammoth ivory.
Shop For Scout Knives