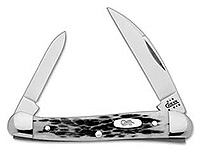 The 109 pattern is a swell center serpentine pen knife that is often known as either a mini or baby copperhead. The master is usually a clip blade, but will sometimes be a spear, and less often a wharncliffe (as pictured). The second blade will most always be a pen blade. The X following the pattern number was added by Case to designate a change in the handle shape.
Shop For Mini Copperhead Knives 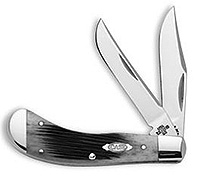 The 110 pattern is a 3 1/2″ jack knife that is known as a saddlehorn. Case makes them with one and two blades. The master blade is a clip blade, and the second (when there is one) is a skinner blade. 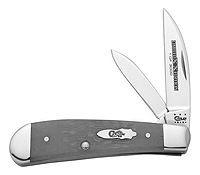 The 117 pattern is a 3 3/16″ jack knife that is known as a swayback jack. Case has made them with one and two blades. The master blade is a Wharncliffe, and the second (when there is one) is a pen blade.

Tony Bose was involved in the design process of this knife.  It was a collaboration inspired by English Jack knives from the 19th century.

The pattern number will always be preceded with the letters TB to signify Tony’s involvement ie… TB62117, TB52117, etc.
Shop For Sway Back Jack Knives 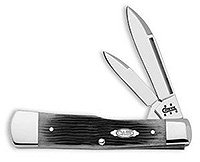 This pattern is a jack knife that is known as a large gunstock. It measures 3 3/4″ closed, and has a spear master blade and a pen secondary. The knife shown has olive Green Barnboard bone handles. 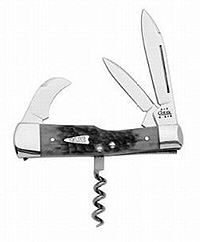 This pattern is a multi-blade knife known as a bartender’s knife that measures 3 3/4″ closed.  They have a spear master blade along with a pen blade, a label blade, and a corkscrew.  They were introduced by Case in 2003. 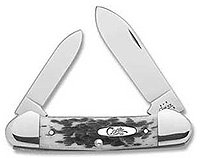 This is 3 5/8″ knife that is normally classified as a double end jack and are known by almost all collectors as canoes. Most models have two blades that share a single back-spring, but some 131 patterns have three or more blades. The master blade will always be a spear as far as I know, and the other will be a a pen. The three bladed canoes often have a spear, pen and punch blade, and are sometimes grouped into the cattleman’s knife category. Newer versions sometimes have a picture of Native Indian in a canoe etched onto the master blade. The first canoe was manufactured sometime prior to 1915.
Shop For Canoe Knives 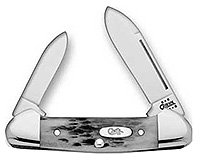 This pattern is a 2 3/4″ knife that is often categorized as a pen, and is normally called a baby butterbean or small canoe. It was introduced by case as a miniature version of the 131 pattern canoe. They look very much the same except for size, and a few other minor differences.  All of these have two blades; a spear master blade, and a pen secondary.
Shop For Butterbean Knives 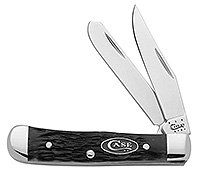 This pattern is a jack knife that most collectors call a tiny trapper. It is very similar in shape to the 54 pattern trapper and the 07 pattern mini trapper except that it is much smaller measuring 2 3/8″ when closed. These knives were newly introduced by Case in 2004.

This pattern is a 3 1/2″ pen knife that usually goes by the name tuxedo.  The master blade is a spear blade, and the other is a pen blade. They were introduced by Case in 2002, and are very similar to Case’s old 056 pattern that was discontinued sometime before 1940.
Shop For Tuxedo Knives 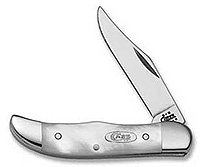 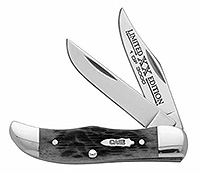 This pattern is a 2 3/4″ jack knife that goes by the name pocket hunter or mini hunter. They have been produced with one blade as well as with two, and are moddled after the 65 pattern folding hunter. The master blade is a clip, and the other (when there is one) is a skinner blade.
Shop For Pocket Hunter Knives 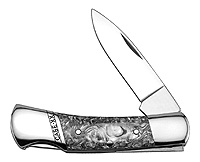 This pattern is a 3″ lockback knife known simply as a small or mini lockback. They have a single drop point blade.  You will find them with a fairly wide variety of handle slabs ranging from yellow composite to abalone.  Full pattern numbers you might see include 31225L (yellow composite), 81225L SS (genuine mother of pearl / abalone), 61225L SS (bone), & 51335L SS (genuine stag).
Shop For Sway Lockback Knives 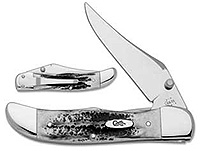 This pattern is a 4″ liner locking knife known as a mid folding hunter that Case introduced in 2003.  They have a single clip blade, a pocket clip for easy carry, and a thumb stud for one hand opening. 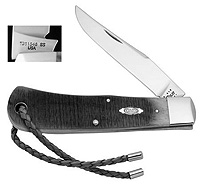 This pattern is a 4 1/2″ single blade knife that Case introduced as a new trapper variation. They are known as backpocket knives & have a nice slender design & single clip blade that makes them great to fit comfortably into a back pocket.

The award winning legendary custom knife maker Tony Bose was the mastermind behind the pattern.  It was a design similar to many knives he has made in the past.

The pattern number will always be preceded with the letters TB to signify Tony’s involvement ie… TB61546, TB51546, etc.

This pattern is called a copperlock. It is a single blade locking knife that was introduced by Case in 1997.  It has a clip blade, and measures 4 1/4″ when closed.  The design is said to be inspired by a combination of the trapper, copperhead, and lock-back hunting knives. View Darrell Stilger’s copperlock list.
Shop For Copperlock Knives 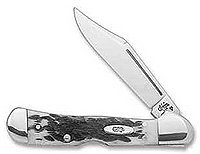 This pattern is mini copperlock that is pretty well identical to the copperlock (pattern # 549) described above except that it is smaller measuring 3 3/8″ closed.  They have single locking clip blades, and were introduced by Case in 1998; one year after the larger 549 pattern.
Shop For Mini Copperlock Knives 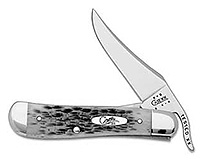 This pattern is a 4 1/4″ knife known as a Russlock.  It is a single-bladed knife that was introduced by Case in 2000.  The blade is of the clip style and has a lever that extends from the rear that allows for opening with one hand.  They also have a liner locking system that locks the blade into the open position.
Shop For Russlock Knives