This number has been used on three distinct folding knife patterns. 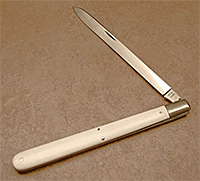 The most recent 00 pattern is a 5 1/2″ jack knife known as a melon tester, citrus tester, or sausage tester. They were produced with either one or two blades. The one bladed version has a long spear blade, and the two blade version has two spear blades that open on the same end. A few have a serrated master blade. These were specially made for a few customers and are generally quite a bit more valuable. The citrus tester was introduced in the late 50’s and was discontinued after the 1975 production year. Case only made them with white composite handles and stainless steel blades.

* Case manufactured a 4 5/8″ Jack knife with the pattern number 00 sometime prior to 1940. They are clasp style Jackknives that have a single clip blade and no left side bolster.

*Case also produced a 4″ jack knife with the pattern number 00 sometime prior to 1940. These are double-bladed knives that are known as copperhead trappers. I believe they always have a clip master blade and a spey secondary.

The 01 pattern is a 2 5/8″ two bladed pen knife known as a senator pen or equal end pen. The master blade will usually be a spear blade, and the other is almost always a pen or file blade. Some of these knives have been manufactured with a bail, and several have been made with tip bolsters. The 01 pattern dates back to the Case Brothers era (1896 – 1915). It was later discontinued for a while after 1974 and reintroduced in 1980. The knives have been manufactured with yellow composite (3201), bone (6201), imitation pearl (9201), and cracked ice (9201).

This pattern is a 3 3/8″ jack knife that most collectors call a regular or bare-head jack knife. They have two blades. The master is usually a clip, and the secondary a pen. Some have a one armed man a.k.a. razor master blade with a pen secondary. The pattern was introduced prior to 1915, and discontinued in the late seventies. It can be found with black composite, rough black, green bone, bone, and delrin handles. After 1970, delrin was the only material used. Some were manufactured with an easy open feature.

Case manufactured a 03 pattern between 1905 and 1914 that is known by many collectors as a half canoe. They are 3 5/8″ jack knives that have canoe style bolsters on the left, and pinched bolsters on the right. They have two blades that extend from the same side.

Case’s most recent 03 pattern is a budding / grafting knife.

Case’s most recent 04 pattern knife is a 3 3/8″ Jack knife that is known as a budding or grafting knife. They have a single spey blade and do not have a left side bolster. Case introduced the knife sometime prior to1940 and discontinued it in the early 1940s. As far as I know, they were only manufactured with bone handles (6104). 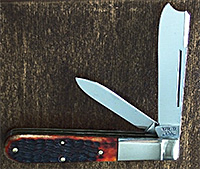 This pattern is a two bladed 3 3/4″ barlow style jack knife. They are often known as a one arm man or one armed bandit knives. Most recent 05 patterns usually have a razor master blade, but in the past, they have also been manufactured with clip or spear master blades. The second blade is always a pen blade as far as I know. When the knife has a razor style blade, it most often takes on the name one arm man. This name was given to the knife because the design of the blade has a tip that sticks out. This allows for the knife to be opened with one hand by snagging the point on a pant leg or other object. When this pattern has this style of blade, the pattern number (when there is one) is normally followed by an R, or RAZ. When the knife has a clip master blade, the pattern number may be followed with a 1/2. The 05 patterns were introduced prior to 1940. Starting sometime before 1965, the knife was only manufactured with a razor blade. The pattern was discontinued for a while starting in the late 70’s. Since that time, a few have been made.
More about Barlow knives | Search The AAPK Club Member stores for Barlow Knives

This knife is a 2 3/8″ jack knife that is often called a tadpole. They have two blades that open on the right side. As far as I know, the master blade will be either a clip or spear blade, and the second will always be a pen. Case has manufactured them since before 1915 to sometime in the 1940’s.

The 07 pattern number has been used on two distinct knife patterns.

Case’s first 07 pattern was a 3 1/4″ whittler that it starting making sometime prior to 1915.  They were most often manufactured with a spear master blade along with pen and short clip secondary blades. 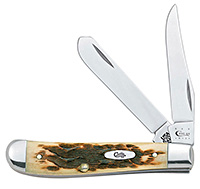 The most recent 07 pattern is a 3 1/2″ jack knife that is often called a mini trapper. Most have two blades. The master blade on them is normally a clip blade, and the other will generally be a pen or spay. The spay blade is most common on Cases more recent 07 knives.  Most of the older knives (Pre-1980) will have a pen blade.  They have been a regular in Cases’ production line starting sometime in the 1930s.
Shop For Mini Trapper Knives

The 007 pattern was the first Case trapper pattern.  It measured 3 7/8″ long and was a predecessor to Case’s current 54 & 07 pattern trappers.  It was last manufactured by W.R. Case & Sons circa 1915.  The current 54 pattern was a direct descendant as it was introduced to replace the 007.  It is similar in shape & style but larger.   the 07 is also very similar in shape & style, but is a bit smaller.

08 patterns have been manufactured in at least three different styles. There are two 2-blade versions, and one 3-blade version.

The oldest 08 pattern is a 3 7/8″ Jack knife that is known as a coke bottle. They were manufactured by Case sometime prior to 1915. 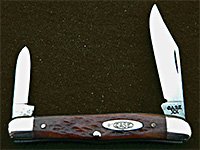 The most recent two-bladed 08 patterns are pen knives that are usually called half or two bladed whittlers, or swell-center pen knives. The master blade is most always a clip blade, and the other a pen blade. They measures 3 1/4″ closed and were introduced sometime prior to 1940.
Search The AAPK Club Member stores for Half Whittler Knives 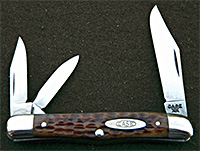 The three blade 08 pattern is one of a hand full of knives known as a whittler. You may hear it called a split back or split back spring whittler because of the unique spring system used in the knives. It is one of Case’s smallest whittler measuring 3 1/4″ closed, so you may hear it called a small split-back whittler. This pattern will usually be found with a clip master blade accompanied by a short clip, and a pen blade. Case started making them sometime prior to 1940.
More about Whittler knives | Search The AAPK Club Member stores for Whittler Knives

This pattern is a 3 1/4″ jack knife that most collectors call budding knives. They have single spey blades and budding tools on left side. Case started making them sometime prior to1940 and discontinued them in the late 60’s. As far as I know, they were only made with black composite handles. 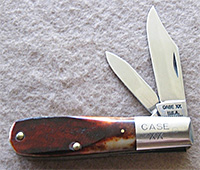 This pattern is a 3 5/8″ barlow style jack knife. They have been manufactured with a variety of blade configurations. Most have two blades, but some have one. On the two blade version, the master blade will be one of the following; a spear, a clip, a razor, a spey, or a sheepsfoot. The second blade will usually be a pen. Case started making them sometime prior to1915.
More about Barlow knives | Search The AAPK Club Member stores for Barlow Knives 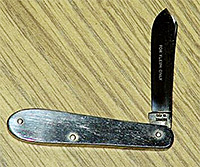 This pattern is a 3 1/8″ Jack knife that is known as a spaying knife. They are all metal and have a single spey blade. Case began producing this knife sometime pre 1920 and discontinued it in the mid 1940’s. 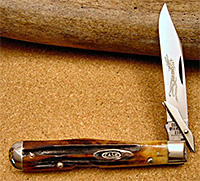 This is a 4 3/8″ knife that is most often known as a cheetah or swing-guard lock back.  On recent versions, you find that the pattern number is followed by a 1/2L. This signifies that the knife has a clip blade that locks open. This pattern dates back to the Case Brothers era 1896 – 1915. Throughout its existence, it has been manufactured with and without a swing guard and with and without a locking mechanism. Some early patterns have two blades (clip and pen), and no locking mechanism. W.R. Case discontinued it after the 1980 production year, and later reintroduced it in 2002.
Price Guide | Shop for Cheetah Knives 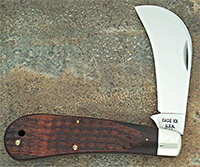 This pattern is a single bladed 4″ jack knife that is most often referred to as a hawk bill or pruner’s knife.  They all have a single hawk bill style blade that was originally used for pruning shrubs and fruit trees, but is now handier for cutting sheetrock, carpet, roofing paper and other such materials. These knives have been manufactured by Case since sometime prior to 1915. Most were manufactured with walnut, laminated wood, or bone handles.  A few were made with pakkawood.
Shop for Hawkbill Knives

The most recent version of the 12 pattern is a 3 5/8″ jack knife that is called an electricians knife. They all have two blades that includes a spear and wirestripper.  The pattern was only produced by case in the years prior to 1940.

There are at least three distinct knives that were manufactured with the pattern number 13.  All of them were discontinued prior to 1940.

*The oldest version is a 3 3/8″ single bladed regular style Jack knife that has a single clip blade. This version has no left side bolster, and I believe were only manufactured with wood handles.

*Another version is a single bladed jack knife that is very similar to Case’s 011 pattern hawkbill except that it is smaller measuring 3 9/16″.

*The other is a 4″ swell-center jack knife that normally has a spear and pen blade. 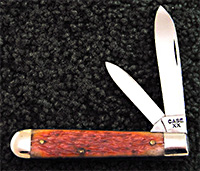 This knife is a 3 3/8″ jack knife that does not go by any particular name. It is usually known simply as regular or slim jack knife.  They will have either a spear or clip master blade, and a pen secondary blade. If the knife has a pattern number, the versions with clip blades will have a 1/2 after the pattern number. Case began producing these knives sometime prior to 1920, and discontinued them in the mid 1970s. They were manufactured with rough black, bone, and delrin handles.  Some older versions have shields, but a lot of them do not.
More about Jack knives | Shop for Jack Knives

This pattern number has been used on at least two different patterns.

Cases oldest version is a 3 5/8″ jack knife that is usually called a gunstock. Case began manufacturing them sometime before 1915, and had already discontinued it before 1940.

The most recent 15 pattern is a jack knife that has the same general shape as the older 15 pattern mentioned above, but is smaller at 2 7/8 “. They are often called small gunstock knives.  Most have spear master blades and pen secondary blades.
Search The AAPK Club Member stores for Gunstock Knives